Some would say that on the really testy outings taking good photos, or even taking a camera at all, is going to hold you back from the climbing.  That's not the reason that I didn't take a camera on our recent 5 day outing on what I preconceived to be the Peuterey Integrale of the Canadian Rockies.  It's more a combination of my respect for the Twins Tower, and the price of a new unit to replace mine which spent three months under the snow a few years ago.

And it's short on a good story, which might come later.  After 5 days on the go, then two days of guiding in Jasper, I don't have the mental energy to tell the story at the moment, so if anyone is interested in the details just get in touch. 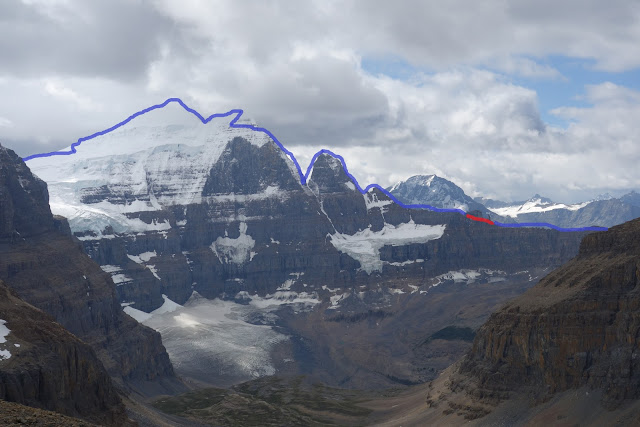 Alik Berg is the best unheralded alpinist in Canada, but is suffering from sore elbows, and texted me looking to get out on something "easy". He was quite distraught when on our first day on the complete north ridge of the North Twin I talked him into walking around the first steep towers on the ridge.  I had to guide Edith Cavell in 5 days time and I figured we would waste time climbing towers that obviously led only to rappels back onto the ridge. And I had told Alik not to bring the rock shoes (light is right, right?).  I am old and don't like climbing hard, and wanted to get on to the bigger towers down the way.  So, for the purists in the crowd the complete ascent of the complete north ridge of North Twin awaits, as marked in red on the photo. 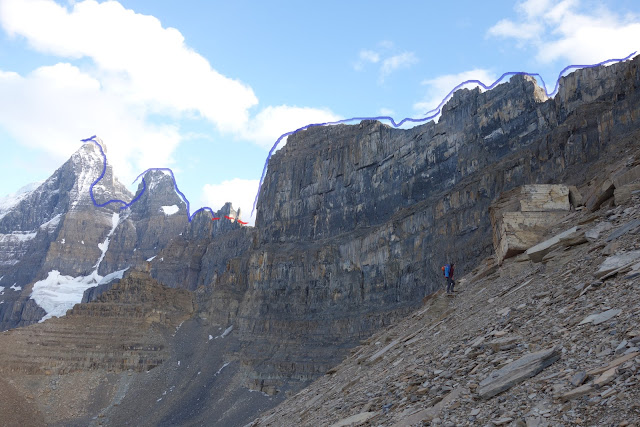 A day of quite arduous approaching led us to the base of the ridge with the impression of a wispy, airy traverse to come.  All side-hilling on the same side of the foot. 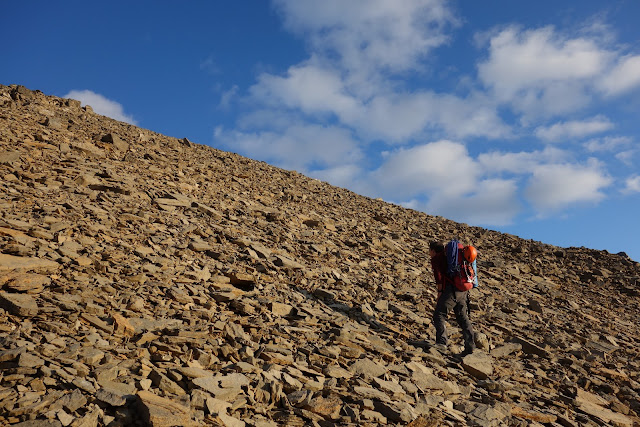 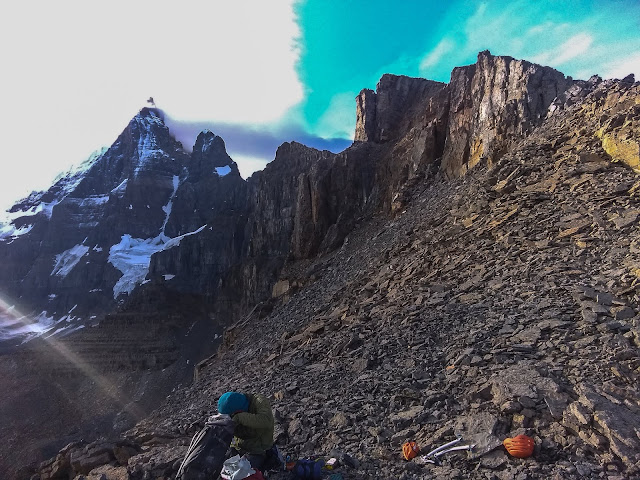 Alik was desperately looking everywhere for a solution to the rock quality at the first bivi.  This was to become a theme of the five days. 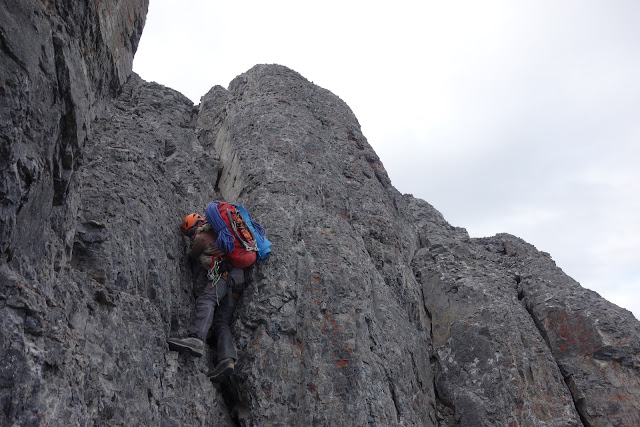 We skipped the first steep towers by traversing to the west on easy scree walking slopes.  I don't care about climbing for climbing's sake, and would rather just get the process underway efficiently, which I was attempting to do while scraping my blue foamy against the first actual climbing on the 4 kilometer ridge. 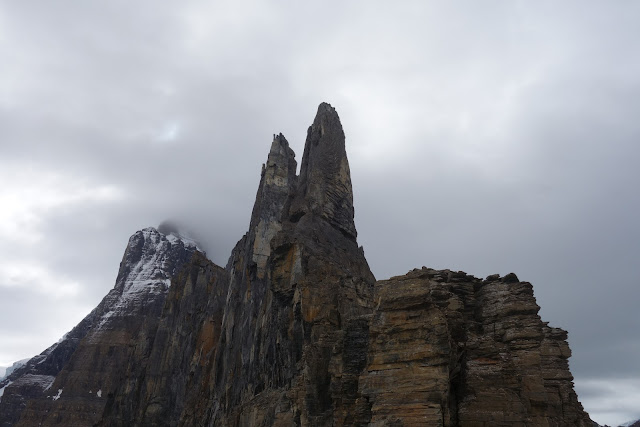 These two, two-pitch towers remained unclimbed, so Alik is going to go back with a stronger partner. 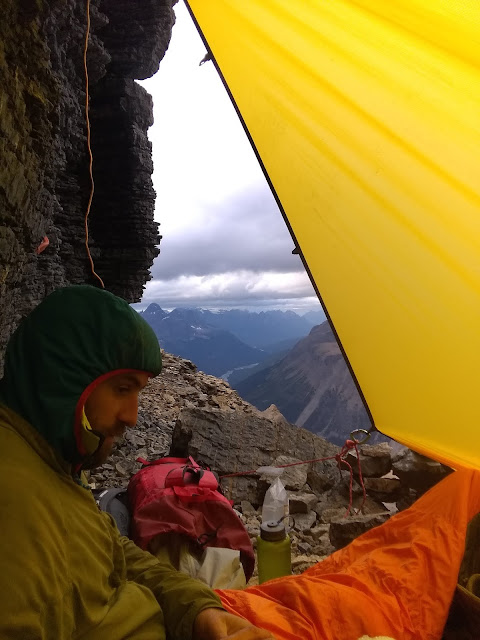 By the end of the second day we were hiding from the wind and the rainy looking clouds, ready to go and look for any trace left by Waterman on his first ascent of the Son of Twin. 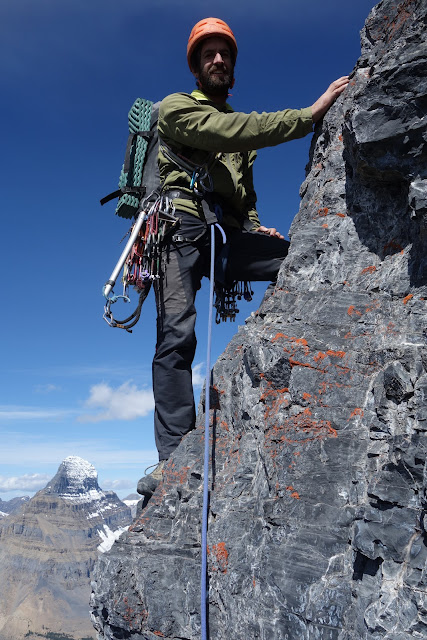 If the Son of Twin were anywhere other than in the Canadian Rockies and next to its much more famous neighbor it would be a major objective in its own right. The face that is, the ridge is a very moderate undertaking. We didn't find any evidence of the first ascent.  Alik likes to take the direct line. I figure Waterman might have taken the easier gully just on the west side of the ridge, which looks like an excellent winter outing with a two day approach. 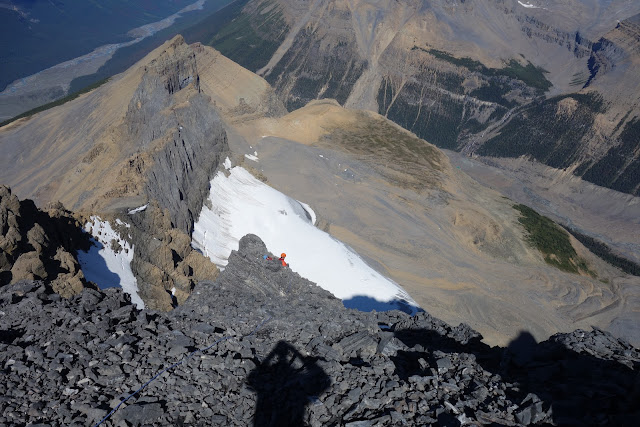 At the top Alik generously demonstrated his complete insensitivity to exposure by walking out onto a stool-sized pedestal in order to get a better view of perhaps the biggest unclimbed rock face in the range. 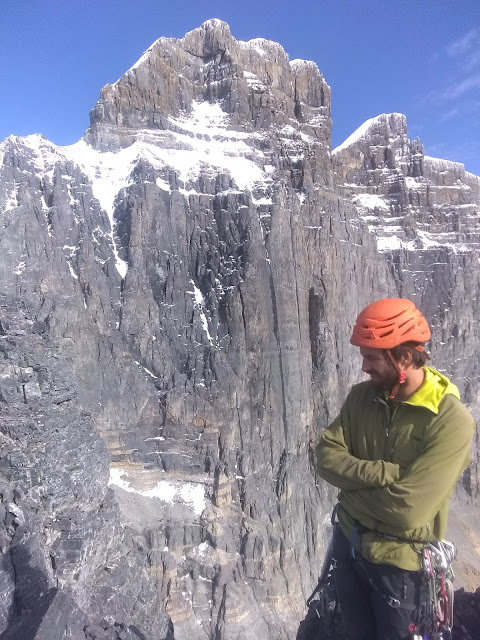 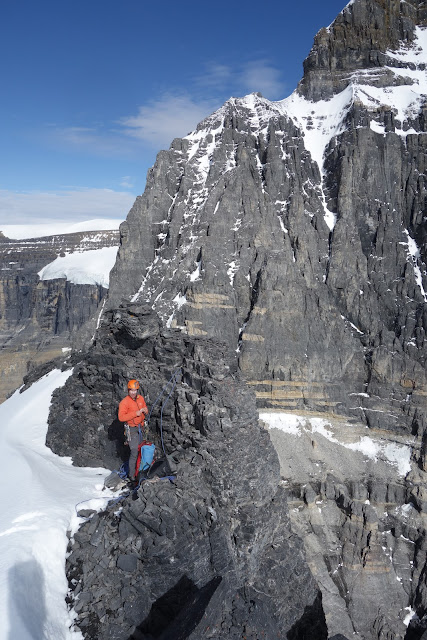 And then he continued the impressive demonstration of fearlessness by leading the raps into the abyss of the Son of Twin-Twins Tower col. 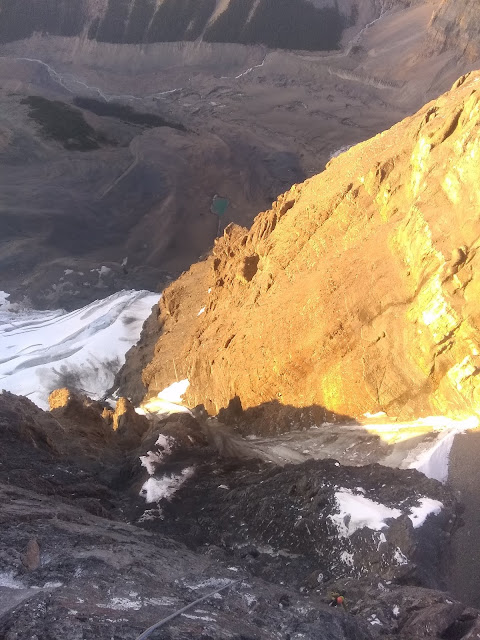 At this point I was honestly attempting to think of a passable reason to give for bailing. I just wasn't that eager to take my second trip up the Abrons Route. 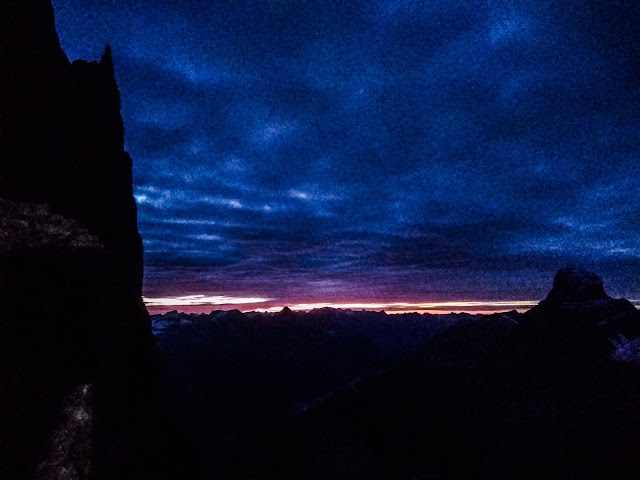 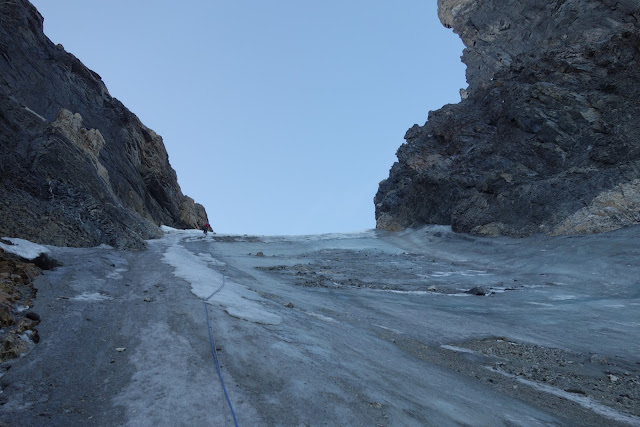 It truly is not that friendly a place to hang out, though now there is a nice bivi wall for the next party at the col.  It is, after all, the Standhart col of the Rockies, as Alik pointed out when we were camped next to the Cerro Torre of our range. 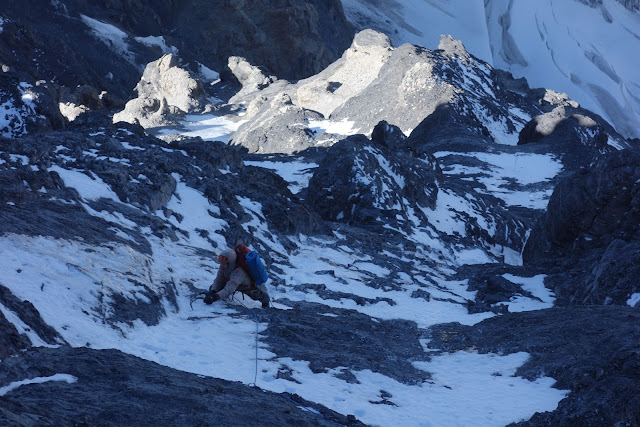 The Abrons  more or less goes wherever you take it, and Alik being adventurous we figured we would check out some new ground. By a hundred meters from the shoulder we were wishing we had taken the same line Brandon and i did a decade ago.  With melting snow we couldn't climb the thin ice lines we had seen a few days earlier, and we couldn't slab climb, so we were forced onto whatever featured rock rib we could find. 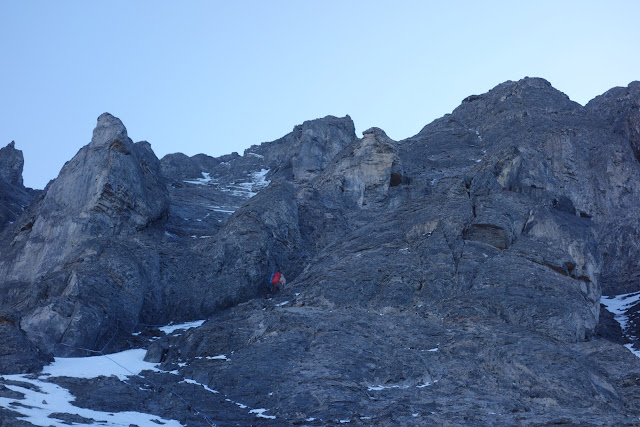 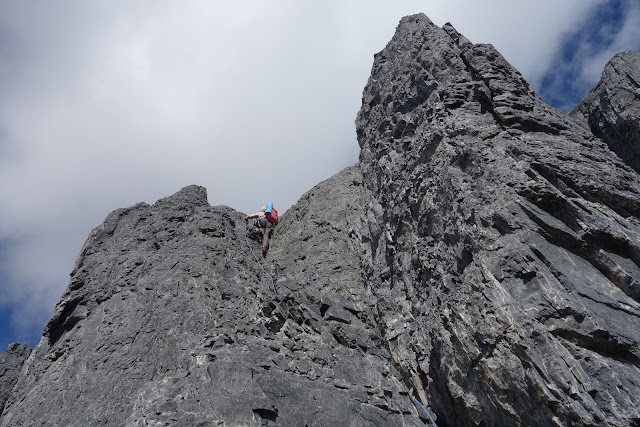 It always works out cause it is practically scrambling, as long as you don't slip, cause there is really no good pro.

By 2 pm on Thursday I was figuring we would have a short walk out on Friday, perfect for my day of guiding Cavell on Saturday.  We were at the familiar shoulder where Brandon and I had begun our easy traverse above the infamous north face. So I told Alik, "just head straight across on the obvious ledge system", but when I swung around the arete and onto the north side I was terrified to be greated by a large snow covered face. Hidden under the wet summer's snow coating was grey ice for our two ice screws, while most of the rock protection was obscured. 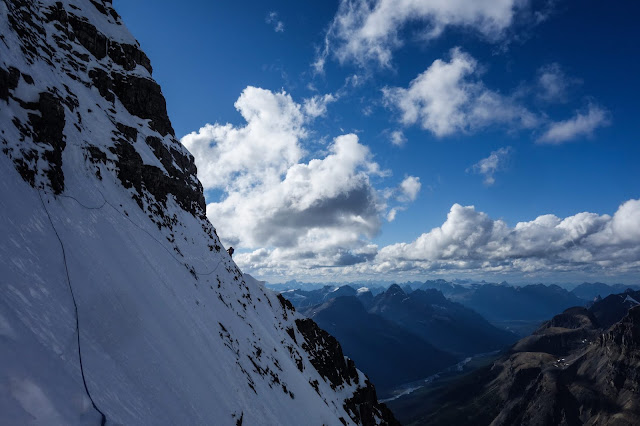 On my last trip, to Waddington, I noted that unprotected snow climbing is my least favourite kind.  Simul-climbing snow covered grey ice with two pieces per 60 meter rope-length is in the running too.

But we did summit Twins Tower just as it got dark, walked to the east side of Stuttfield by 2 am, and hit the mud flats of the Stuttfield cirque by 3 pm the next day, and then the weather on Saturday was too topsy-turvy to climb Cavell, so I went and climbed Roche de Perdrix and at Hidden Valley with Keith from Reno in what was best described as a cold sauna. 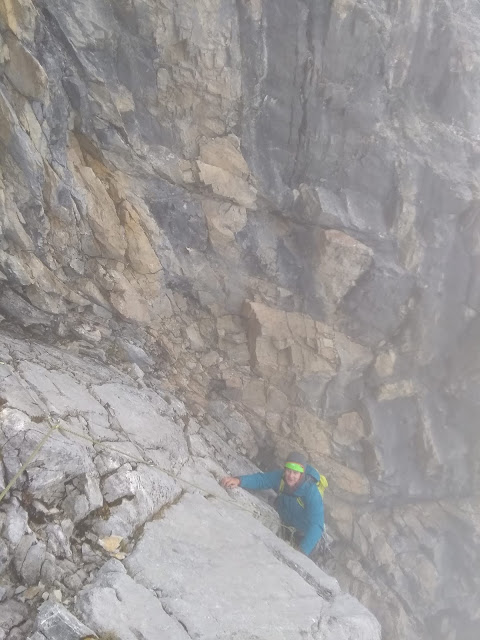 Now a few days later I am planning my retirement to sport-climbing in Penticton. And Alik is still the most bad-ass alpinist in the range, even with wonky elbows.
Posted by iwelsted at 23:16